Founded in 1982, we had for many years, a north London shop specialising in theology and philosophy. With the development of the internet from 1997 onwards we were able to close our London shop and move to the heart of rural mid-Wales where we have continued to develop a general second-hand book business with both a physical book shop and a thriving internet presence.

Our London bookshop was housed in a large Church, using the former vestries as Book Rooms (the Church remains in use), and during the summer of 1997 we experienced a large number of thefts from our warren-like premises. Books were disappearing from the shelves at a rate equal to those which were logged in our till. In mentioning our problem to a friend, who was holidaying in Spain, we had no idea how events would unfold.

He sent us a printed copy of an ancient curse on book thieves believed to emanate from the Monastery of San Pedro in Barcelona. In a spirit of light hearted amusement, we posted the copies throughout our shop and were dumbfounded that it worked. Thefts ceased & books were returned through the post with notes of apology. We wrote a short letter to the Church Times informing them of this phenomenon and asked if any readers knew of a similar curse that might induce some decent sales.

Thursday's copy of the Church Times arrived at our desk, delivered an hour early by the local newsagent with our story on the front page. All very good, we thought, and rather a laugh.

The following morning our newsagent delivered both the Times & Telegraph two hours early as they both contained lead stories about our shop and the bookseller curse. Tuning into Radio Four at 7.00 am we were taken aback at our names being mentioned, first in the press reviews, then in the main news bulletin, and this was quickly followed by telephone calls from the BBC, ITV, and other independent stations.

We decided not to open the shop due to the weight of press reporters at the front door that morning but took calls from several national newspapers. It was when faxes and telephone calls began to arrive from Spain, Ireland, the United States, Brazil and Mexico that we thought perhaps this story had gone a little too far. As well as enquiring calls and faxes we also had a threatening message from a book thief worried about their life expectancy.

On Saturday we crept into our shop at 4.00am and pasted a 'NOT OPEN' sign to the door. Trying to avoid the reporters still gathered at our entrance we immediatedly took down all the 'curse' notices posted throughout the shop.

During the following week, calls and faxes died away, we took receipt of more parcels of stolen books - almost all of which were not our books, and we heartily wished we had never mentioned the subject.

For him that stealeth a book from this library, let it change into a serpent in his hand and rend him. Let him be struck with palsy and all his members blasted. Let him languish in pain, crying aloud for mercy and let there be no sur-cease to his agony till he sink in Dissolution. let Bookworms gnaw his entrails in token of the worm that dieth not, and when at last he goeth to his final punishment, let the flames of Hell consume him for evere and aye. 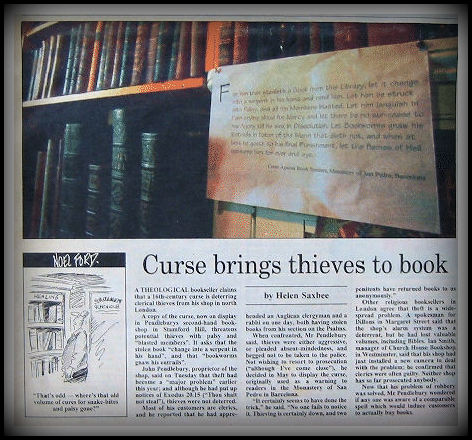 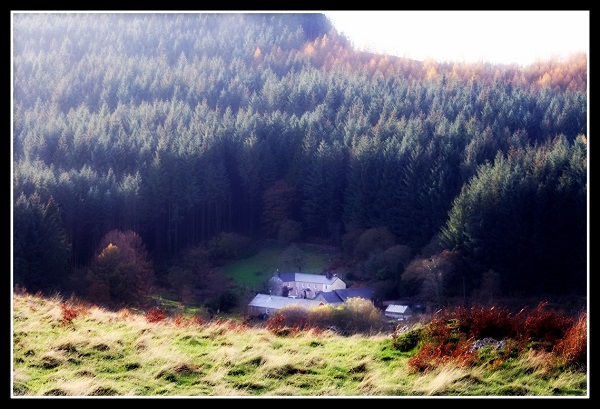 "A journey into the middle of nowhere was rewarded by a friendly greeting, hot coffee and lots of chatter. This really is an oasis in the wilderness and the tens of thousands of titles on offer took some hours to browse and were a joy to behold. Only a fraction of the books are on the internet at the moment. There are many scarce titles on offer, particularly on field sports and rural pursuits." - Chris Harte (TheBookGuide)